The conventional wisdom in functional programming communities is that lambda calculus was "discovered". Extending the logic of the statement to its extreme, we might propose that an alien would recognize lambda calculus as a computational model. But would we be able to recognize an alien lambda calculus?

This talk is part gedankenexperiment, part speculative fiction, part practical advice on compiler design. We begin by imagining ourselves to be creatures in a universe which is very different from the one we're in, except the notion of consciousness and intelligence are preserved from our current universe. From there, we shall explore the physics and alternate philosophies that would yield an alien lambda calculus.

Of course, being from an alien conception, there are some questions that must be answered - in the name of practicality, is there perhaps even a weak notion of a functor from the alien lambda calculus to that of the one we know today? Is there anything from the alien lambda calculus that we may yield and put into practice? And what is this pesky business with state? Isn't the point of functional programming to hide states from the programmer by abstracting over them? Or was it to make clear the states? And what of names? Isn't lambda purely anonymous? 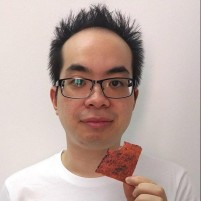 Xuanyi is Just Another Human Bean. He is the primary author of Gorgonia, a suite of libraries for doing deep learning library in the Go programming language (which he's proud to note, predated the public release version of TensorFlow).

By day he works as the chief data scientist of a local startup. By night he chases the weirder ideas that he believes will help him create SkyNet. That leaves him somewhat a Jack of All Trades and Master of None.